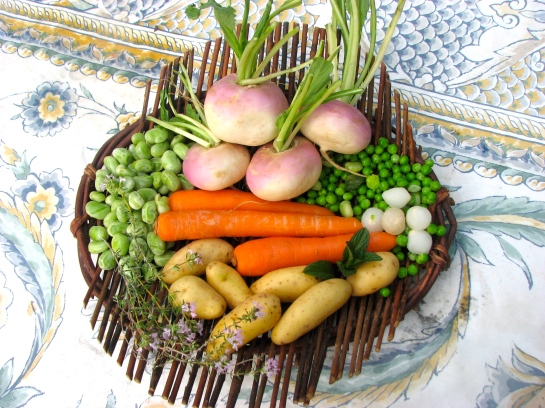 Repositioning is what cruise ships do in the Spring and Fall. Many ply the Carribean and Latin America in the winter, move to Europe for the summer, and then sail back to U.S. waters in the Fall. The past several years Brad and I have done our own repositioning twice a year, as often as we can on cruise ships, but reluctantly by airline too.

Our posts have been few and far between the past couple of weeks because we were getting ready to move back to France, which involves packing and tying up all the loose ends for a six-month absence. Even after years of doing it, it’s never easy.

So here we are, back in our house on the outskirts of a little village in the Var region of Provence.  It’s always such a joy to arrive, no matter what time of year. Spring has arrived here: the fruit trees are in full blossom and the others are just turning green, heralding the warm days to come. The air is balmy and sweet during the day and crisp at night, and when you have lunch on the terrace at midday, the sun infuses your whole body with warmth. Whenever we tell people that we live half the year in San Francisco and the other half in Provence, they say how lucky we are and even express envy.  We smile and say, “We don’t mind it”, but they are right to be envious.

Our first serious task is to stock up on food and wine – a chore we relish. We head to our nearest village market (fortunately held the day after our return) to stock up on basics like new olive oil, farm-fresh eggs, Spring vegetables and goat cheeses. Then on to our local winery – run by Mme. Castellino, a large, jolly woman of indefatigible spirit – to fill our bidon with her excellent rosé and to catch up on the gossip of the months we’ve been gone.  We’ve already been to the supermarket to indulge in some of the pleasures we’ve missed while in San Francisco – tiny rougets from the Mediterranean, a couple of duck legs, a saddle of rabbit, an enormous frisée and giant leeks for leek and potato soup.  It’s a mystery to me why they can’t grow decent frisées and leeks in America – but let me not start on this topic, one on which I can get pretty wound up.

This is the week before Easter, schools are out and there’s lots of hustle and bustle. Easter is the time for Spring lamb in France, as traditional as turkey at Thanksgiving in America. I’m not going to give a lamb recipe because it depends on whether you’re cooking for a crowd or just for two or four. So many lamb recipes turn up on the internet: Leg of lamb (gigot) roasted in the oven or, better, on the barbeque, wonderful baby lamb chops grilled to perfection, navarin printanier (spring lamb stew) and a host of others.  But I will give my recipe for the veggies I always do, whether they’re going to accompany a gigot or chops or go into the lamb stew.  I search out the first tiny Spring vegetables – the ultimate celebration of the season.

The same of turnips

About a dozen new potatoes, no bigger than walnut size

Salt, pepper and a large pinch of sugar

Prepare the vegetables: Scrape the carrots with a peeling knife, leaving a stub of the green tops attached (for appearance).  If they’re longer than about 3″, cut them in half. Cook them in lightly salted boiling water until barely tender. Cook the turnips in the same way, without their green tops, and quarter them if they are larger than a golf ball. Blanch the onions for three minutes.  Boil the potatoes until they can just be pierced with a knife.  Peel them when they’re cool enough to handle.

If you manage to find fava beans, they are worth doing even though they’re a bit of trouble.

You need to strip them from their pods, boil them for about five minutes and then pop each bean out of its skin, leaving a wonderfully bright green gem.

Either shell the peas and cook them in lightly salted water until just tender or blanch the frozen ones for one minute.

Assemble the dish:  Melt the butter in a heavy-bottomed saucepan.  Add the pinch of sugar and a little salt.

Saute the onions over the lowest heat for 3-5 minutes,  until lightly browned.  Add about half a cup of water, and when it comes to the boll, add all the vegetables and the mint.  Gently stir them around until the water has evaporated and the veggies are lightly glazed.  Adjust the seasoning.  They are best served at once but can be gently reheated.

Serve with whatever lamb you have prepared.  They may be the best vegetables you eat all year. 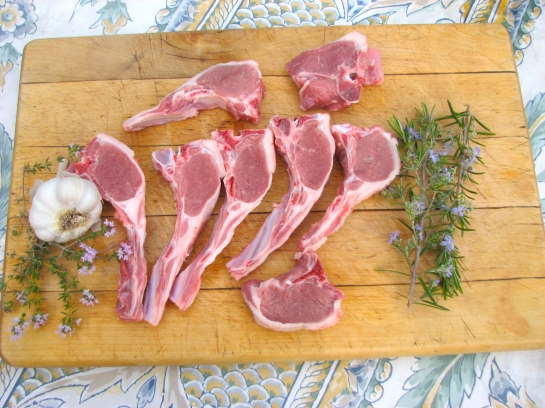