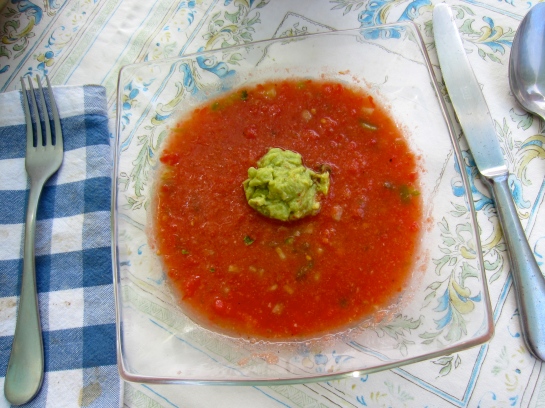 It’s June 21st(ish) and summer has officially arrived. And just as well, because after a somewhat cold and windy spring, it has in the past few days become unpleasantly hot.  The cicadas are all too aware of the change of season: they took up their summer posts today and have begun their high-pitched chant which loses its charm quite quickly, particularly as they position themselves very close to the pool and the house. Still, it’s reassuring to know that they’ve survived yet another year.

Summer makes us think first of all of tomatoes, which because of the cold spring, are just beginning to be worth eating.

When they’re at their peak we eat tomatoes virtually every day in one form or another – salads, stuffed, in sauces, and of course, as gazpacho.  I think we could probably go a whole summer on a diet of gazpacho. In Spain now you can find it made with watermelon and strawberries and beets and cherries and all sorts of other exotic ingredients but none of them really beats the original. Our gazpacho tends to be less liquid than most you’ll come across in Spain because we like to load it up with garnishes and don’t like to dilute the tomatoes with too much water. Suit yourself. If you like it thinner, add more water. I’m not keen on tomato juice as I think it subverts the pure taste of good tomatoes. I do think it’s important to use sherry vinegar and a Spanish olive oil, if you can find it.

I’m also giving our recipe for salmorejo, which is from Córdoba. It’s a close cousin of gazpacho, which originated in Seville. It’s made without onion or cucumber.  Some days we think we like it better.

2 tablespoons red onion or any mild onion such as Vidalia

Soak the bread in water for 5-10 minutes then lightly squeeze out the water.  Core the tomatoes and cut them into large chunks.  Cut the cucumber, pepper and onion into smallish pieces.  Working in batches, process a mixture of each of the vegetables until smooth, saving a few pieces of tomato. Process the garlic in the food processor and then add the bread, oil, vinegar, the saved pieces of tomato, salt, pepper and optional piment d’Espelette and blend until you have a creamy dressing, adding up to a half cup of water.  Add this to the tomato mixture and check for taste.  You may want more salt and/or vinegar.

Now if you want a really smooth gazpacho, run the whole thing through a blender – not essential, but definitely an improvement.  Chill the gazpacho for up to 2 hours. If I haven’t planned ahead, I put the gazpacho in the freezer for up to twenty minutes, stirring it once half-way. I like to fold in the cucumber and pepper garnishes (instead of serving them in a bowl) and top each serving with a splash of olive oil and a sprinking of chopped basil if I have it on hand. For variety, or for a festive occasion, I sometimes add a dollop of guacamole or a few cooked shrimp as a garnish!

Use the ingredients listed for gazpacho, increasing the bread to a 4″ piece and eliminating the cucumber and onion.

Make it in exactly the same way but I do think it’s important to put the mixture through a blender at the end.  The traditional garnish is finely chopped hard-boiled egg white and chopped Serrano ham.  I’m not keen on the egg but do like to use Serrano ham or proscuitto.  Try both and see what you think.